Sometimes, while working on the Linux command line, you might want to test certain things like integer values, or whether or not a file is of certain type? You’ll be glad to know there’s a built-in command line utility test that lets you do most of these comparisons and tests.

In this tutorial, we will discuss the basics of this tool using some easy to understand examples. But before we do that, it’s worth mentioning that all examples in the article have been tested on Ubuntu 16.04 LTS.

As already mentioned above, the test command is used to perform checks and comparisons. Here’s its syntax:

And here’s what the man page says about this utility:

Following are some Q&A-styled examples that should give you a good idea on how the tool works.

Note: Keep in mind that some of the command line options test provides are most useful when used within shell scripts.

Q1. How to compare two strings?

Simple, you just need to use the equal to (=) sign between them. For example:

A better way would be to write something like this:

Similarly, you can use the following template if you want to test for inequality.

This is also very straight forward – just compare them using ‘-eq’. For example:

Here’s a screenshot showing how this command line option works:

To test which of the two files are newer, use ‘-nt’. For example:

Here’s how I tested it on my system:

Other file comparisons that you can perform include which among the two files is older (-ot) and whether two files have same device and inode numbers (-ef).

To check whether a given file is a directory, use the -d option in the following way:

Following are some other file-type test options the ‘test’ command offers: 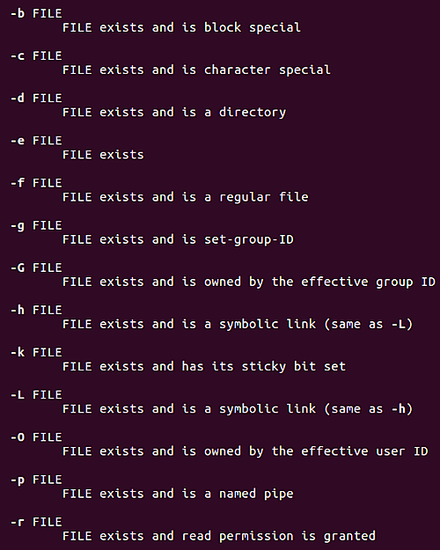 The test command dereferences symbolic links, although there are a couple of exceptions. Following is what the man page says about this:

In case you aren’t aware, both -h and -L check if a file exists and is a symbolic link – so their exclusion makes sense, right?

The test command offers a lot of options, but broadly speaking, you can club them into 3-4 categories. We have provided examples on each category. So try these out, and when you’re done, head to the utility’s man page for more info.