Sometimes, you may want to view the contents of a compressed file without uncompressing it first. Well, you’ll be glad to know Linux offers a command line utility that lets you do this. In this tutorial, we will discuss the basics of the zmore command using some easy to understand examples.

But before we do that, it’s worth mentioning that all examples here have been tested on an Ubuntu 18.04 LTS machine.

The zmore command in Linux is basically a file perusal filter for crt viewing of compressed text. Following is its syntax:

And here’s how the tool’s man page defines it:

Following are some Q&A styled examples that should give you a better idea on how the zmore command works.

Suppose you have a compressed file – test.html.gz in my case – whose contents you want to quickly view one page or line at a time on the terminal screen. Here’s how you can use zmore to do this: 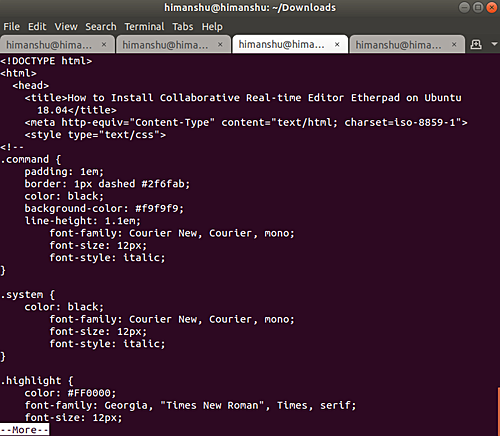 So you can see the first page of the file was produced in the output. You can press the enter key to scroll and see and the rest of the file one line at a time. To quit press ‘q’.

Q2. How to make zmore scroll file contents multiple lines at a time?

Of course, pressing the enter key multiple times is a way, but it’s definitely not an elegant way out. A better way is to press the spacebar key, which lets you scroll one screen at a time.

However, in case you want to scroll the content multiple lines at a time, just press ‘i’ followed by a number that represents the number of lines to be scrolled.

Q3. How to make zmore skip lines or screens?

The zmore command offers two options for this:

Q4. How to make zmore display the current line number?

At any point in time while using zmore, if you want to know the current line number, just press =.

For example, in my case, zmore displayed 35 at the bottom of the screen when I pressed =. 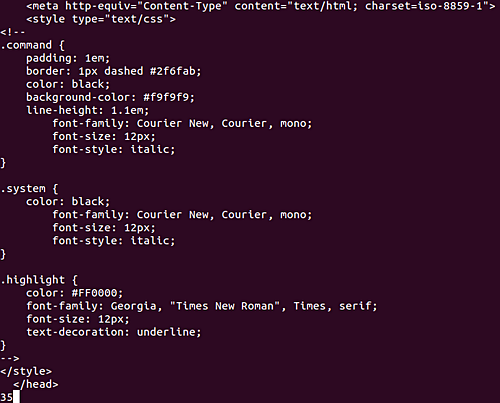 This is done through the file /etc/termcap. The man page explains it in detail:

To change window size, use the ‘iz’ method. Here’s how it’s explained:

The zmore command is handy for those who deal a lot with compressed files. Learning curve for the tool isn’t steep. We’ve already discussed some useful command line options zmore offers. To learn more, head to the tool’s man page.

Himanshu Arora has been working on Linux since 2007. He carries professional experience in system level programming, networking protocols, and command line. In addition to HowtoForge, Himanshu’s work has also been featured in some of world’s other leading publications including Computerworld, IBM DeveloperWorks, and Linux Journal.