Regardless of the OS you use, if you aren't into computer forensics or are a pro/enthusiast in general, you'll likely be surprised to know that when y

Regardless of the OS you use, if you aren’t into computer forensics or are a pro/enthusiast in general, you’ll likely be surprised to know that when you delete a file, the file contents aren’t actually deleted from the hard disk immediately.

However, there are tools that make sure the data becomes unrecoverable. In Linux, there’s a command line utility – dubbed shred – that’s built for this purpose.

In this tutorial, we will discuss shred using some easy to understand examples. But before we do that, it’s worth mentioning that all examples in this article have been tested on an Ubuntu 18.04 LTS machine.

The shred command overwrites a file in order to make original contents unrecoverable. Following is the command’s syntax:

Following are some Q&A-styled examples that should give you a good idea on how the shred command works.

If you just want to use it to overwrite a file, then all you got to do is to execute ‘shred’ with file name as input.

For example, I used it on file1.txt:

And the following screenshot clearly shows the file’s content got overwritten by this tool. 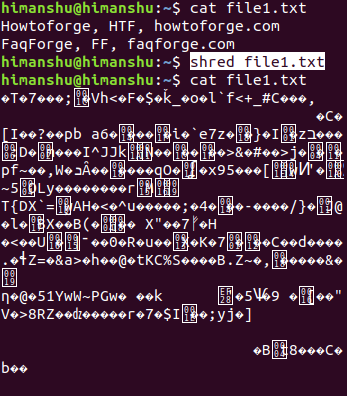 Q2. How to change number of times file is overwritten?

By default, shred overwrites a file 3 times. However, if you want, you can change this number using the -n command line option.

For example, to make sure the tool overwrites the file ‘file1.txt’ 10 times, run the following command:

Q3. How to make sure Shred deletes the file as well?

If you want shred to not only overwrite, but delete the file as well, then use the -u command line option.

For example, I tried running the shred command in the following way:

And could confirm that the file actually got deleted.

Suppose the requirement is to only overwrite a set number of bytes from the file. This can be done using the -s command line option, which requires you to pass the number of bytes as input.

For example, my file contained the following text:

And I wanted shred to overwrite only 10 bytes. So for this, I used shred in the following way:

And here’s how the operation affected the file contents:

So you can see only the first 10 bytes were overwritten with garbage by the shred command.

Q5. How to tell shred the way to delete?

We have already discussed the -u command line option that tells shred to delete the file in addition to overwriting it. But there’s another option – dubbed ‘remove’ – that allows you to tell shred the way you want it to delete the file.

Following is how the man page explains the ‘remove’ option:

As you may agree, the shred command is an important tool if your work involves dealing with – especially deleting – sensitive data. Here, in this tutorial, we have discussed some command line options shred offers. Once you’re done practicing these, head to the tool’s man page to know more.

Himanshu Arora has been working on Linux since 2007. He carries professional experience in system level programming, networking protocols, and command line. In addition to HowtoForge, Himanshu’s work has also been featured in some of world’s other leading publications including Computerworld, IBM DeveloperWorks, and Linux Journal.